I did a blitzkrieg trip to Munich for the first ever DITA-OT Day. It was a complete blast for me, and here is a report. 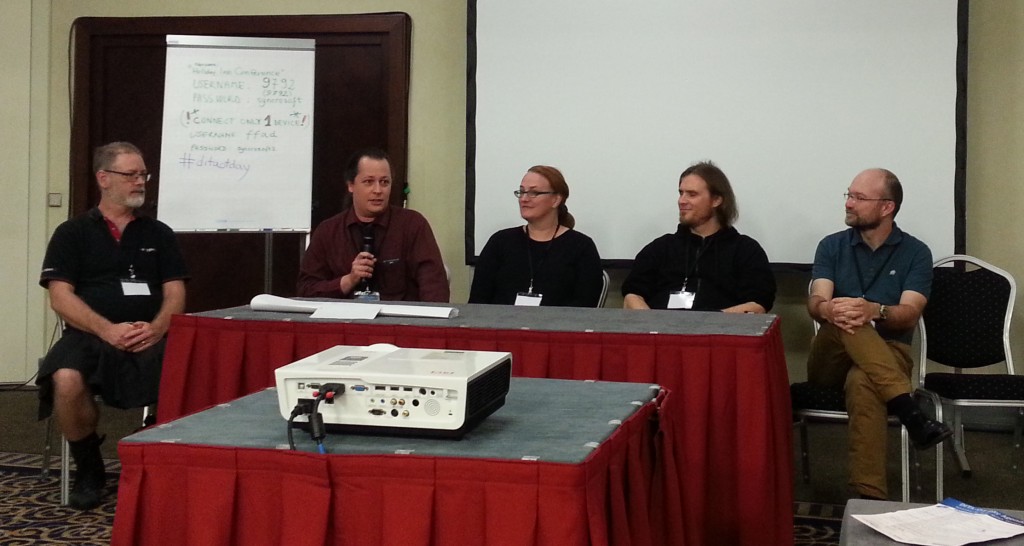 First, “DITA-OT” is the DITA Open Toolkit, an open source tool for processing DITA XML source files and outputting them to various formats like PDF, HTML, webhelp, Eclipse help, etc. It’s highly configurable and customizable and is used by many DITA vendors, and by many companies and individuals in one form or another. It’s something I work with all the time in my client engagements. There have been many presentations involving the DITA OT at other conferences, but there has not been a day-long conference devoted to it.

The DITA-OT Day was a free event organized by the creative and super-productive George Bina of Syncro Soft (makers of the Oxygen XML editor) with the help of several other people. Sponsors were Oxygen, Ixiasoft, DITAworks and Gnostyx.

For a documentation tools geek, XML programmer and irrational DITA enthusiast like me, the DITA-OT Day was kind of the equivalent of a moon landing: I got to travel to a very far place and listen to and interact with the most important inhabitants of planet DITA-OT.

It was held at the Holiday Inn in central Munich, right after the end of the CIDM DITA Europe Conference that was held in the same hotel. So the DITA-OT Day was piggybacking.

You might ask why a whole day would be devoted to the DITA Open Toolkit. It’s just a DITA output tool, one of many ways you might go. But it’s dominant in the DITA community, with many people using it. And although it has no official connection to the OASIS DITA specification, the DITA OT tends to be the most up-to-date and comprehensive DITA processor available. It’s not a simple matter to do all the processing necessary to conform to the DITA spec. Without the DITA OT, I believe that DITA would not be nearly as widespread. The OT has many warts, and some people really dislike it, but it is a pillar of the DITA community that we could not easily replace. It makes sense that a tool this important would come into its own a little more.

I estimate that over half of the attendees were programmers, so this promised to be a pretty geeky event.

Some of the many things I enjoyed:

The greatest thing for me was getting a deep dive into DITA OT internals, presented by the person doing most of the OT coding these days: Jarno Elovirta. It was also great to hear him pronouce his last name in person. He said all those syllables so fast!

Hearing Jarno’s descriptions of various parts of the OT, things he hates, things he wants to change and so on, was very gratifying for me.

During the event the release of DITA Open Toolkit version 2.0 was announced.

Also, I had expected to pay for my own lunch, but attendees were treated to a very nice lunch at the hotel restaurant. This was not advertised!

The day was a big success with more people attending than expected. 91 people attended in person, and I hear there were as many as 80 more watching the stream online.

The outline of the presentations is here:

There will be recordings of the talks, split into segments, but they are not ready yet. Check the Oxygen website or follow George Bina on Twitter: @georgebina.

The OT needs more volunteers to do documentation, programming, and give support in various ways. If you are interested, talk to Robert Anderson of IBM at his site: http://metadita.org/. Or @robander.

On June 12 I remotely attended the PDX (aka Portland) DITA meeting. (I used Google Hangouts, which worked surprisingly well.) It was hosted by the lively, friendly and technologically curious Jive Software Tech Pubs group.

Featured presenters were Sean Healy and Carlos Evia. They presented Sean’s DITA Open Toolkit plugin for HTML5 video, which is called OVID. They discussed using video with DITA, and gave in-depth demonstrations of how the OVID setup works. It was very interesting.

Video is something we are only going to see more of, and it behooves us to learn about it. More on OVID here, you can use it yourself:

I wrote four “guest blogger” posts on the DITA conference for our sister DITA group in Portland, first one here:

The LA Weekly is very interested in DITA this week. 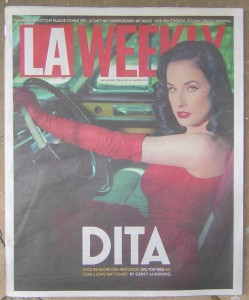 By the way, this is a joke. The lady above is Dita von Teese, who poses for cheesecake photos. The article is about her, not about the Darwin Information Typing Architecture.

When: Wednesday, March 2, 2011, 6:30 pm to 9:00 pm PST
Where: Home Restaurant (near Griffith Park), see map below
Address: 1760 Hillhurst Avenue, Los Angeles, California 90027 (see map below)
Website: http://www.homelosfeliz.com/
Restaurant Phone: 323 669 0211
Presentation: “Down and Dirty DITA for No Dough” by Mark Giffin.
Also, roundtable discussion, general DITA information sharing, ideas for future meetings.
Who Should Attend: All are welcome! No charge, but this restaurant is letting us use a room, so buying some food is encouraged.
Questions or assistance: Contact Mark Giffin: ladig@ditamap.com

The Los Angeles DITA Interest Group is having its first meeting. All are welcome: people who are interested in DITA (Darwin Information Typing Architecture), DITA practitioners, managers, vendors, anyone else. This is a free, casual meeting. Since it is at a restaurant, you can buy food.

I want to start a group for people in the general Los Angeles area who are interested in the Darwin Information Typing Architecture (DITA). No dues or admission charges. I am looking for people who are interested in DITA and want to learn more about it, and people or companies who want to do presentations. The idea is to have meetings on something like a monthly basis. There is no location yet, but I’m open to any suggestions.